After a serious car accident that took the life of his wife, Keith finds himself confined to a wheelchair and imprisoned in his 4th floor walk-up apartment. Lonely and understandably questioning his faith, Keith is visited by his long time priest counsellor Father Salvo, home health care supervisor Julia, and his best friend Carlos. Keith struggles to decipher reality from his own dreams, delusions, and perception of death as he mourns the loss of his wife and struggles with a severe case of post-traumatic stress disorder.

Born in the USA, JORDAN TARATOOT won several awards with his previous short film. He produced and directed quite a few commercials, music videos and trailers. Taratoot’s work is shown on ABC, FOX, MTV. His directing influences include Stanley Kubrick, Quentin Tarantino, and David Lynch. The Caged (2017) marks his feature film debut.

Loss, grief and their effect on the mind can be scarier than any carnal threat. Horror is most effective when we’re not sure what lies beyond the darkness; the suspense and anticipation of the scare is more important than the scare itself. The mind is more powerful than we can understand and it becomes the monster that Keith is forced to overcome. My biggest inspirations include films such as The Shining, Don’t Look Now, and The Exorcist.

MISCHA BARTON
Star of The O.C., The Sibling, Apartment 1303 3D, The Sixth Sense.
Established as one of the most sought-after young actors of her generation. In recent years, she starred in Mining for Ruby directed by Zoe Quist, Beyond Justice with Danny Trejo and Vinnie Jones and opposite Billy Zane in Elephant’s Graveyard. Barton's most recent film appearances are alongside Martin Sheen in Bhopal: A Prayer for Rain and as the protagonist in the supernatural romance thriller Into the Dark. 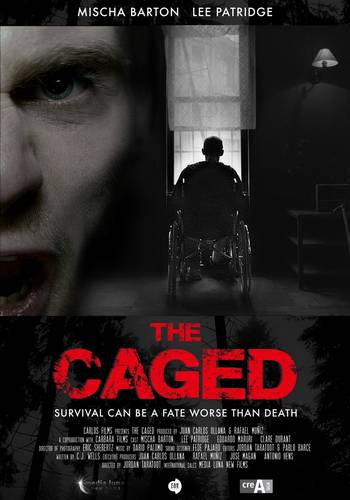