In a kingdom where man and nature are segregated, twelve year old Robin runs off into the forbidden forest where she meets Wolf, the young true heir to the throne.
Robin, Wolf and some unexpected allies set in motion an adventure which will topple the Bad King and restore balance between man and nature.

Kristoff Leue is a Belgian director and (creative) producer with a passion for world cultures, multimedia formats and animation projects.
Dimitri Leue is a prize-winning writer, director and actor.

ZOOks is the story of man’s challenging relationship with nature, translated into a metaphorical conflict of two royal brothers, King Alexander and Prince Ferdinand. ZOOks intends to enrich its family audience with knowledge of and love for nature, engaging it to discover nature. We developed a unique workflow for the animation of the film, combining 2D rotoscopy with 3D sets.

MATTEO SIMONI is a multifaceted actor who has quickly become one of Belgium's most sought-after young talents (Berlinale shooting star 2018). Of Italian descents, he studied acting in Antwerp and acted in several TV series. In 2013 he starred as protagonist in Marina by Stijn Coninx.

FRANK FOCKETYN is a veteran TV and Film actor, having acted in some of the most popular Flemish TV series, such as De Ronde and Booh!. 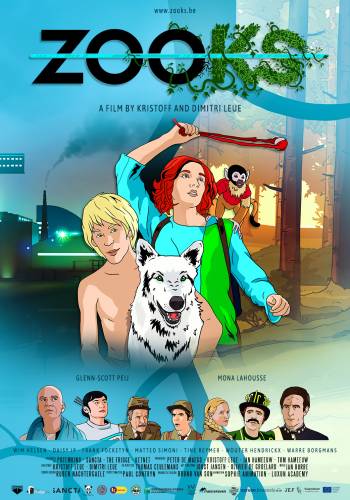